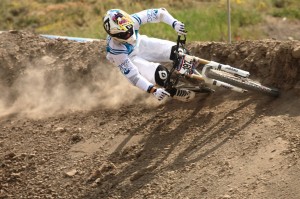 I just wanted to give a congrats to Aaron Gwin for doing something no American DH rider has been able to accomplish in 6 years. At the last World Cup race in Mont Sainte Anne he scored a 3rd place finish and stood on the podium rubbing shoulders with the likes of Sam Hill, Steve Peat, Gee Atherton and Fabien Barrel.

I was introduced to Aaron by Rich Houseman 2 years ago and have been working with him since he started his pro DH career. While Aaron has some great talent I have to say that I feel some personal vindication in his meteoric rise. He has not logged a single “base mile” on a road bike and has been following the same principles of increasing strength and mobility that I use in every program I write.

As many of you know I have been a bit of a black sheep in the mountain bike training world because of my radical views on training for our unique sport but now it is pretty hard to argue with the results they have helped produce. Aaron has established himself as the top American in the world and is starting to make some noise on the big stage as well. He is the model client and does what I ask of him and trains hard.

He is only 2 years into his career and I hope that we can take this all the way to the top of the podium. Rock on Aaron, you’re on fire! Look out world, America is coming!