Are Clipless Pedals Enhancing Your Performance or Covering Up Your Dysfunctions?

Better is a relative term, especially when talking about artificial means of performance enhancement. The mistake people make is assuming that because something improves performance it must be better and therefore you want to use it all of the time. The fact is that equipment can either enhance good technique and fitness or cover up technique and fitness gaps and there is a huge difference between the two. The first will let you tap into your own abilities even more and the second will lead to plateaus and overuse injuries.

Once you can ride almost as well on flats as you did on clipless go back and try clipless pedals again and I’ll bet you see a big difference in how effectively you can use them.

In mountain biking this is seen in the rampant use of clipless pedals but ours is not the only sport that has this problem and we can learn something by looking at the parallels between our situations. In fact, the best analogy to explain this concept is the use of a weight belt when squatting or deadlifting.

Using a weight belt will help you lift more weight, which technically makes it “better” from a performance point of view. However, anyone who knows anything about strength training knows that you don’t use a weight belt all of the time. You save it for when you need it but, on average, 80-90% of your lifts should be without it. 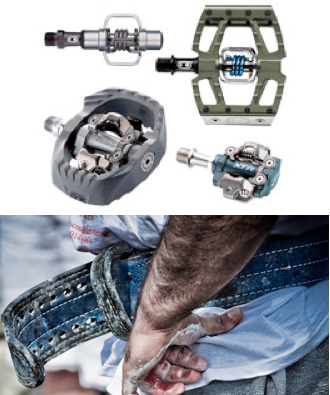 Why is this? If a weight belt is “better” then why do the strongest guys in the world not use it all of the time? The answer is because they know that you must build your technique without it so that you keep yourself honest and do not start to use the belt to cover up technique flaws. Watch someone who really knows how to squat and his technique will look the same with or without the belt and his best raw squat (using no belt) won’t be too far behind his squat while using a belt.

Compare this with the average gym rat who uses a weight belt for everything. It doesn’t take a highly trained strength coach to see that they their technique sucks and if you took the belt away and exposed their pathetic core strength they wouldn’t be able to squat nearly as much. Most of us would agree that in this case you are better off building your technique and fitness “raw” and using the equipment to enhance that base.

In fact, most sports have specialized equipment that is “better” than normal training equipment but they only use it to get used to it and for competitions. Track has racing shoes, swimming has special suits and I believe that clipless pedals belong in the same category – equipment that does enhance your performance but not something you should be using all of the time since they can be used to cover up technique flaws.

The truth is that you should be able to ride a bike relatively well with some good flat pedals and shoes. In one study (Mornieux et al. Int J Sports Med 2008; 29:817-822) it was found that the pedal stroke of elite cyclists looked the same on flats and clipless pedals. Another study (Korff et al. Med Sci Sports Exerc 2007; 39:991-995) showed that pedaling in circles or pulling through the top of the pedal stroke resulted in a less powerful and efficient pedal stroke –  in other words, there is no “magical” pedal stroke that is only available by attaching your foot to the pedals.

If you can’t pedal half as well without being attached to your pedals then that is a sure sign that you would benefit greatly from some time spent riding “raw”, so to speak, and building your technique and fitness base without the aid of being attached to your bike. Once you can ride almost as well on flats as you did on clipess go back and try clipless pedals again and I’ll bet you see a big difference in how effectively you can use them.

It is always a good idea to go back from time to time and spend some time on flats, just to keep you honest. During the off season make sure you do your indoor intervals with them since you can’t really practice clipping in and out anyways. During the riding season at least spend a couple rides each month on flats as a way to check your technique and make sure that you aren’t developing any bad habits along the way.

The dirty little secret is that the best riders are already in this category – take away their clipless pedals and they would still be the best in the world. They are using clipless pedals to enhance their already great technique, not make up for the fact that if their feet weren’t attached to the pedals they would fly off on every climb or rock garden. Training “raw” is a lesson that every sport has learned and we would benefit from not trying be at “100%” all the time and developing our technique and fitness base without the help of artificial enhancements. Clipless pedals are “better” in some regards but with that knowledge needs to come the perspective on how to best use them.

4 thoughts on “Are Clipless Pedals Enhancing Your Performance or Covering Up Your Dysfunctions?”