Bench pressing for mountain biking: A waste of time?

The other day I was looking around one of the mountain biking forums and I came across a subject that I wanted to address. I was in the Fitness Forum and saw a thread that had gotten a lot of activity…there were more than 20 pages worth of people taking time out of their day to respond.

The subject was bench press strength. I forget the exact question but it basically prompted people to post their “bench press weights”. It seems that a lot of people know exactly how much they bench press and consider the ability to move a lot of weight in the lift important.

I don’t know why but I felt compelled to respond and basically say that if you are lying down on your back and pressing something off of you then you screwed up on the trail. There is no real functional reason for the strength you gain in the bench press exercise. I don’t prescribe it in my programs (I can honestly say that in the last several years I have not had a single rider bench press) and it doesn’t seem to slow my riders down.

The response was something along of the lines of “who cares if we want to talk bench press on a mountain bike fitness forum”? Well, for one I care and I’ll tell you why…

Like it or not, the information that new riders get from websites and forums plays a big role in their development as riders. If they are on a forum and see that everyone thinks that bench pressing is important then they will assume that it is. They will pursue the lift with the same devotion most American males do and waste a lot of time and effort in the process.

If you want to get good at bench pressing then you have to spend a lot of time on the lift. That is time that you can not spend on practicing more important exercises. If you tell me that you can bench press 250 pounds at a bodyweight of 175 pounds, I don’t think you’re strong, I know that you’ve wasted a bunch of time working on one exercise when you need to been working on mastering the basics in all movement patterns.

I’d be willing to bet money that most big benching bike riders would have trouble with a lot of the basic exercises I use for mountain bikers every day. Here is a list of exercises basic exercises that I think every rider should be familiar with and have a reasonable amount of strength on:

These exercises will have far more direct impact on the trail than lying down on a bench and pressing a barbell off of you. If you are spending more than a couple sets on the bench press each week you are wasting your time on a lift that is done more for tradition than true purpose. If you are going to spend time in the gym, why on earth would you not want you workout time to enhance your trail time?

Bench pressing also has very limited carryover to life or other sports. Outside of wrestling and combat sports I have a really tough time thinking of another time in life when you are pressing with the aid of a back brace. The core’s function in real life pressing has to be addressed in your training program. 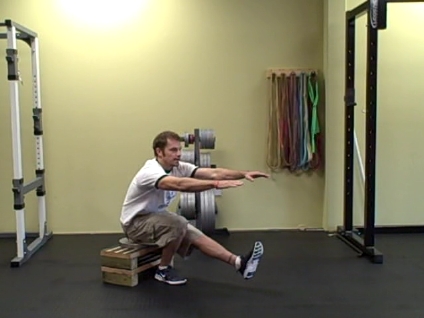 So, it does matter if more guys know exactly how much they bench press than how much the can lift on a single leg squat. It shows a lack of training priorities and emphasis of lifts like that are one of the reasons that people have “tried” strength training but never felt it did much for their riding.

If done right, strength training will have a noticeable and dramatic impact each and every time. Just make sure that you are spending time on movements and exercises that will train the body to act like you want it to on the trail. While your bench press may suck, you’ll be riding faster…I’ll take that trade off every day.