No matter what area of life we are talking about one of the worst mistakes someone can make is assuming that the first thing that brought them some success is the best way to do something. This mistake leads them to dismiss other, more productive ways to accomplish their goals. When I worked a lot in the fat loss industry I had an analogy to describe this all-too-common phenomenon – the fat person curling soup cans…

When you suck at something, almost anything you do will move you towards being better. Problems arise, though, when you start to get better and the old ways stop working.

If you took someone who is fat and out of shape, spending all day sitting behind a desk at work or on the couch at home, and have them start to walk around the block while curling soup cans they will start to lose weight and see results. However, this doesn’t mean that walking around the block curling soup cans is the best way to lose fat. If this person mistook the first thing that brought them success as the best way to do it they would eventually plateau, stop seeing results and eventually quit.

When you suck at something, almost anything you do will move you towards being better. Problems arise, though, when you start to get better and the old ways stop working. At this point the usual plan is to simply do more of what worked before, hoping that it will kick start the results again (using our fat person analogy, if walking around the block 4 times isn’t working anymore then let’s make it 6).

When looking at this problem from this perspective most people would agree that there are much better ways to accomplish this goal, such as better nutrition and training strategies. Refusing to look at other options because they had initial success with one way of doing things will lead to long term failure. But this is exactly what is happening in the mountain biking world every day.

1) Just ride your bike more. This is the first and most obvious one – when you first started riding your bike you got much better and improved your trail fitness rapidly. Almost every time you went out for a ride you could ride a bit further or clear something you couldn’t ride before. This is obviously very intoxicating as you start to think that this progression will just keep happening until you are one of the best riders in your area.

However, as almost every rider finds out at some point, this approach stops working. You hit a wall and no matter how much more you ride you just can’t seem to bust through it. The problem is that riding simply allows you to apply and realize your athletic potential on the bike but it doesn’t appreciably improve that potential as you get better.

The true paradox of mountain bike riding is that at a certain point you have to get off the trail in order to continue to get better on your bike. You can not improve your mobility, strength and power on the trail and once you’ve tapped the potential of those things out you have to go back and increase them in order to see improvements on the trail. Instead of riding all the time you will improve fast with less time on the trail and more time in the gym.

2) Clipless pedals make you “faster”. While I admit that clipless pedals, in the right hands, can you make you faster I will say that most rider’s experience with them leads them to believe that they are the one and only way to ride. While I’ve written extensively about this subject in articles like Which Muscles are Really Used During the Pedal Stroke and Being Pro-Flats Doesn’t Make Me Anti-Clipless, at the heart of the issue is the apparent performance boost seen by new riders when switching to clipless pedals.

Since most riders have never had the chance to experience a good pair of flats and shoes (like 5-10 sticky rubber shoes) their first experiences on the trail with cheap flats and tennis shoes is usually pretty scary. Feet are flying off the pedals, they can’t pedal very well and maneuvering their bike on the trail is an act of faith more than skill. Then the well meaning local bike shop guy sells you some clipless pedals and a lot of those problems seem to go away.

Now your feet stay on your pedals (even if you don’t want them to and you tip over when stopping), your pedal stroke seems smoother and you can actually use your new pedals and shoes to pick up the rear end of the bike so you can bunny hop. All in all you’ve become a “better” rider, which means that clipless pedals must be the “best” way to go. However, this is not the case.

The truth is that for the vast majority of riders the clipless pedals didn’t enhance their performance but instead covered up the lack of pedal stroke and technical skills. Learning how to pedal and maneuver your bike on flats will actually make you a better rider in the long run, not to mention the improved longevity of your knees and hips. Clipless pedals can make you faster but only if you’ve built your technique on flats, meaning that they have a valuable place in every rider’s toolbox. 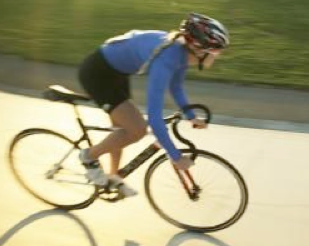 3) Riding a road bike for off-season training. Again, I’ve tried to explain in previous articles that I am not against getting out on the road for training but I do not get the use of a road bike for those workouts. I think that the real issue is, again, the initial results seen by a rider who undertakes a real workout plan more than there being magical properties to riding a road bike. Since road cycling has traditionally been far more structured in their training approach, most mountain bikers have their first taste of the power of structured training from a training plan for roadies.

If you get out for several hours a week and apply a training plan to your workouts you will see far better results than either doing nothing or just winging it on your own. However, much like the fat person curling soup cans, those same riders make the mistake of confusing the principle of having a structured training plan with the method of riding a road bike. You can tweak principles to better suit your needs and improve your results but when you get stuck on a specific method you get very limited with what you can do.

As you can see this mindset of “first thing that brings me results in THE WAY” is very prevalent in our sport. It is one of the first obstacles I have to overcome when explaining to mountain bikers that a strength and conditioning program designed with the unique demands of trail riding isn’t optional if you really want to be a better rider – they are the only way to see sustained improvement year after year. Don’t be like the fat person curling soup cans who sees some results and then refuses to expand their mindset when the results stop coming.

Seeking other ways to improve isn’t comfortable since you have to both question what you thought you knew and look at new ways of thinking about your problem but it is the only way to separate yourself from the masses of “average” and start to become good or even great. In fact, I’ve had to do this exact same thing several times over the years and when I look back at the training programs I wrote 10 years ago I can see several things that I could do better, which is why I am on a constant search for better ways to produce results in the least amount of time possible.

It is also the reason I created the Ultimate MTB Workout Program and why it has been revised 4 times – I wanted to give riders everywhere access to the best workouts programs I’ve created as a result of thousands of hours of study, hundreds of clients trained and my experience both as a mountain biker and a strength coach. It remains the best program on the planet for riders who want the absolute best training plan possible to help them ride faster, longer and with more confidence on the trail.

In fact, here is a testimonial I got from Jeff Lenosky, who is one of the more famous mountain bikers out there after having appeared in countless riding movies, who came to me earlier this year wanting me to help him improve his trail riding fitness so he could be more competitive in a local race series…

“Early this season I decided to get more serious about my training so I teamed up with MTB Strength Training Systems.  The results have been great, I’ve podiumed in Super D, Observed Trials, Speed Trials, Enduro and XC events this year and having a well rounded strong body has definitely helped make all this possible.”

On a side note, I qualified for the Cat 1 40+ XC Nationals next year!  Haha. I went to race a Super D and the next day was the first qualifier for next year and I got 2nd!”
~Jeff Lenosky

If there was ever a rider who could sit back and say “I want to just keep doing what I’ve been doing” it was Jeff…you don’t become world famous as a rider without something you’re doing working. But, like most great performers, he recognized the danger of the “fat person curling soup cans” mindset and sought help to continue improvement. If you want to avoid those pitfalls and jumpstart your growth as a rider again then be sure to check out The Ultimate MTB Workout Program and don’t get stuck in the frustrating cycle of just trying to do more of the same thing.