How do you deal with compromises in life and training?

As most of us find out pretty early on in life, compromise is just something we have to learn to deal with. I was reminded of this by a couple of things that happened over the last week, namely asking my 8 year old daughter what she wanted for desert, getting my basement gym set up and planning out my next few months of training.

However, I was randomly saved by a memory of John McClain in the original Die Hard movie stepping on broken glass and I stopped myself from actually setting my foot down on the ground.

First, my little girl Shilo. She hates to make a decision between two options and nothing exemplifies this more than getting her some dessert. Last night I asked her if she wanted some jelly beans or Oreos and you could see the wheels turning in her head as she worked over the compromises between the two options.

After a minute or so of silence as she continued to think things through I bailed her out and offered 4 jelly beans and 1 Oreo, which she gladly accepted. In this case I probably didn’t help her out with the bigger picture – which is learning to deal with compromises – but I saved myself another few minutes of sitting around waiting for her to eventually ask if she could have both anyways.

On to my new basement gym…

As I mentioned in my post about Applying the 10 X Rule to Riding, Life and Moving I was a bit behind schedule on getting moved into my new home and getting my dream home gym set up but I eventually got finished. I’m really happy with how it turned out and I was able to get all the equipment I wanted in it while still maintaining a roomy, open feel. Here’s a pic of how it turned out… 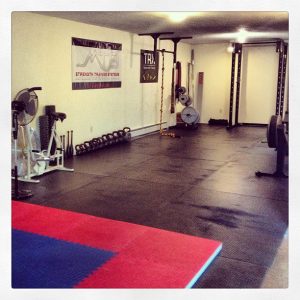 Now, at first glance it may not seem like I have to make too many compromises with this set up and you’re right, I really don’t have many at all. But I do have one that became painfully obvious as I was setting things up – a relatively low ceiling.

While I have enough ceiling height to do everything I need to there isn’t a lot of room to spare. Add in some big glass light fixtures and dragging a squat rack around barefoot and you have a recipe for disaster.

As I was moving the squat rack around to see where it would fit best I didn’t remember that there was a glass light fixture right behind me and I dragged it right into it. The glass globe exploded over my head, scared the crap out of me and I started to run away as a natural reaction to the noise and glass raining down on me.

However, I was randomly saved by a memory of John McClain in the original Die Hard movie stepping on broken glass and I stopped myself from actually setting my foot down on the ground. I picked it up and sure enough, a piece of glass was stuck in the bottom of it. It turned out to be a minor cut but it could have been much worse if I had actually kept trying to run.

BTW, the compromise there are lower profile light fixtures just to be safe.

And all of this brings me to my last point about learning to deal with compromise, which is setting up a training program.

One of the hardest things I have found for riders to do is to be realistic about what is possible with a given set of circumstances. They want to do all things all of the time – they want to ride/ race at a high level while training hard to also improve their performance and usually doing it all with some sort of nagging overuse injury. This, my friends, is a recipe for mental and physical disaster.

If you are racing and/ or riding a lot you and want to perform at the best of your abilities you have to focus on being fresh enough to do that. This means you can’t also expect to train hard and try to also significantly improve your performance as well.

If you want to focus on improving your performance then you have to realize that the time and physical effort it takes will detract from your on bike time and performance. You can’t expect to be in the middle of a hard training phase and also perform at the best of your abilities because of this extra fatigue.

And if you are hurt or are dealing with a nagging overuse injury then you have to realize that neither training nor riding will be optimal right now and both should be carefully limited. You have to focus on fixing the problem and not continue trying to lay down more fitness on top of your current dysfunctions.

Most of the time compromises aren’t too bad if you just learn to deal with them.