Is seated pedaling like doing a bong hit of crack?

The other day I was watching television and a commercial came on for a desk that doubles as a standing desk. If you don’t know, standing desks are becoming more and more popular as we start to realize how bad it is to sit down so much.

The desktop looked pretty cool – it would convert from a regular sit down desktop to a standing one in just a few seconds – but it was something they said during the commercial that caught my attention.

They made a statement that I have heard before but not on such a large format as a television commercial being broadcast during an NFL playoff game.

They said that according to health experts “sitting is the new smoking”. 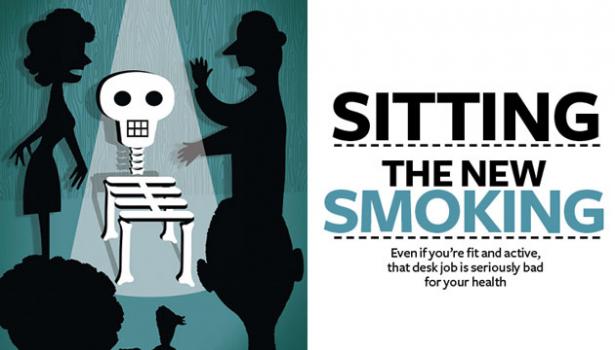 That’s right, too much sitting can be as bad for you physically as smoking. Now, I know this will get some people upset but think about it.

Who would you rather have on your side in a fight – a smoker who is active or a non-smoker who is very inactive and sits around all day?

Obviously that is a ridiculous choice and the best thing to do is to avoid smoking and too much sitting.

But why is it that sitting is so bad for us?

While being inactive while sitting is part of the reason, there is more to it.

Another reason that sitting too much is so bad for us is because it puts us into an “adult fetal position” for long period of time. You know the one, where your shoulders are slouched and your knees are tucked up towards your chest.

And when your body is exposed to this same position over and over it starts to adapt to that position.

Your body will literally change its shape to accommodate the positions that you find yourself in the most of the time. This is why people who sit a lot have such bad posture when they stand up – their body is literally locked into that “adult fetal position” from sitting so much.

Now, if sitting down at a desk typing emails is like smoking, what does that make seated pedaling on your bike like?

I mean, when sitting down on your bike you are placing a lot of stress on the body while you are locked into that “adult fetal position”. This means that your body will adapt faster to that position and lock you into it even faster.

In my mind, this means that if sitting at your desk is the new smoking then seated pedaling is like doing bong hits of crack.

In other words, it is a terrible for your body. This is the #1 reason that most riders have such bad mobility (and technical skills as a result) – they are locking their hips and shoulders into a bad position by relying so much on seated pedaling.

In fact, seated pedaling is so bad that an entire industry has sprung up in the bike world to help you make the most out of it – the bike fit industry. But despite their best efforts every year thousands of riders still suffer low back, knee, hip, ankle and neck pain as a direct result of too much time and tension being applied to the seated pedaling position.

But there is a better way.

If you stop buying into the lie that standing pedaling is “less efficient” or that you need to sit down on climbs for traction, then a whole new world opens up.

When you stand up several great things happen for your body…

– You can see further ahead without as much neck strain

– You can have more fun!

…and that is just a partial list of benefits. 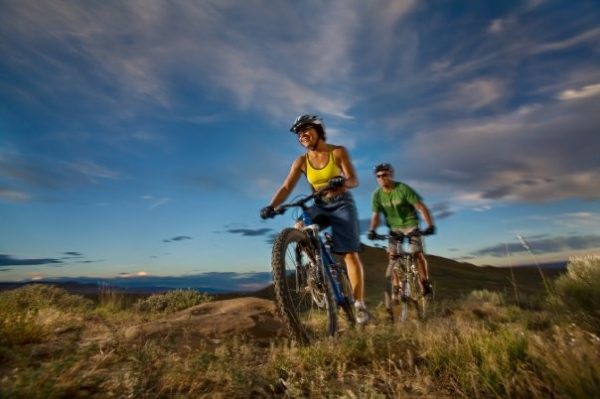 But the problem is that standing pedaling requires some core strength, hip strength, upper back mobility and technique that most riders don’t come into mountain biking with. This means that they have to work on it…but few are told how.

Which is why I recommend that every mountain biker have a plan for how they are going to improve. If you don’t then you are leaving it to chance or, as the ancients would put it, to the gods.

I don’t know about you but I hate leaving things to chance and I certainly don’t believe that Zeus controls what kind of rider I become (I’ve been reading the Iliad in case you are wondering about the Greek god references).

I want to have some control over my fate as a mountain biker and that means having a program like the 90 Day Skills & Fitness Program or the Ultimate MTB Workout Program to help me.

It also means going against the usual advice to sit and spin as much as possible and to avoid standing up like the plague. The best thing to do is to use standing pedaling as you power position and seated pedaling as your recover position.

Learning how to best use both positions is the goal but right now most riders simply sit down way too much based on bad advice.

Of course, when you stand up more you’ll get some riders telling you how you will tire yourself out from so much standing pedaling.

You’ll just have to wait for them at the top of the hill you just powered up to hear what they were saying.

So anyways, while doing a bong hit of crack might be less healthy than too much seated pedaling it is still something to keep in mind. Sitting down is not good for us and when we go from sitting too much at work to a sport that wants us to sit down all of the time it will cause problems.

So stop sabotaging yourself both at work and on the bike. Stand up more in both places and your body will feel and perform much better for it.