A few months ago I ordered a steel mace. Now, if you have never seen a steel mace it is exactly what it sounds like – a long steel handle with a ball on the end of it. In fact, it wouldn’t look out of place on a medieval battlefield.

But I didn’t get it to use as a weapon, although you certainly could in a pinch like the zombie apocalypse.

No, this was actually a new workout toy for me to try. 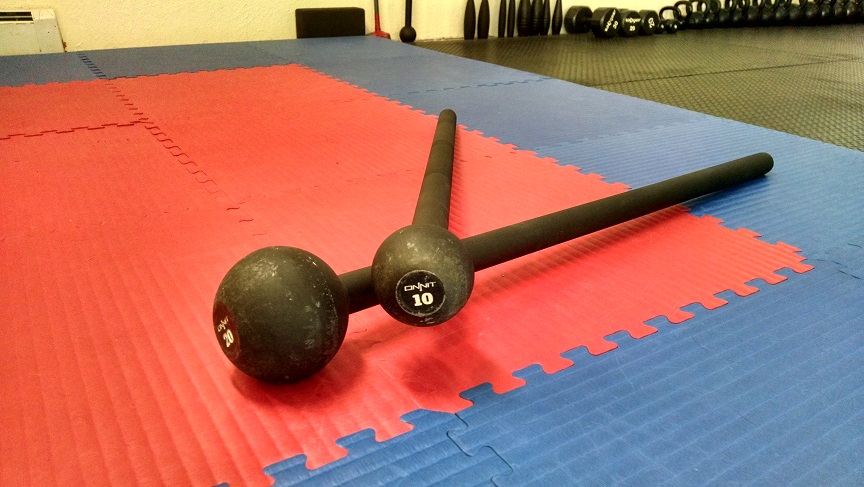 And in the last few months this new toy has quickly become my favorite workout tool and something I think could be the “cure” for the common hunch-backed posture that so many rider suffer from. In fact, I’m pretty amazed that we haven’t heard more about it before.

While it looks like something you could use to brain zombies with, the mace is actually based on the Gada (basically a stick with a rock on the end). It has been used by Hindu warriors and Indian Kushti Wrestlers for over 2000 years to build upper body and grip strength.

The mace definitely represents something of a lost art in the world of strength and fitness. I first came across the mace through the company ONNIT. They make a version of the mace that I had seen for a while but kind of wrote off as a silly gimmick. I mean, how hard could a 10 pound stick really be to handle?

But then I had a few things happen that piqued my interest.

First, I had a wakeup call from my neck. Or, more specifically, a pinched nerve in my neck. Despite doing a lot of the “right stuff” it seemed that I still had a gap in my upper back strength and mobility and needed something that really targeted these postural muscles.

The second thing was when I read a book called Natural Born Heroes. In it they quote Steve Maxwell – the guy behind the Russian Squat Sequence and Breathing Ladders I’ve written about before – and he mentioned how the ancients used tools like the mace and Indian Clubs to train the upper body’s natural elasticity and “spring”.

Since posture is a big part of this “spring” it stood to reason that these exercises also worked on the posture and upper back mobility I needed. I figured that when I could easily handle a mace my upper back had to be stronger and more mobile.

I knew that there was something to all of this and so I ordered a 10 pound and 20 pound mace. I figured that I would let my wife and little girl use the 10 pounder and I would use the 20 pound one.

After they showed up I realized I quickly realized that 1) holding a mace felt pretty bad ass and 2) I severely misjudged how heavy these things would feel. The 10 pound mace felt was tough to pick up and handle and the 20 pound mace was almost impossible to do anything with.

So after fashioning one for my little girl out of some PVC pipe and a stick and starting with the 10 pound mace myself I started to play around with it to see how it felt and what it could do.

Initially I started out with the basics…

– The Spear Stab (much harder than it looks)

– The 360 (upper body strength, stamina and mobility training at its finest)

I’d do a simple routine like this a couple times a week:

The biggest lesson I’ve learned so far is that the mace rewards balance and positional alignment more than it does raw strength. When I had good posture, position and balance the mace felt much lighter but as soon as I lost one of those things it got much heavier. While I could try to muscle my way through it I quickly learned that it was easier to focus on keeping things balanced and lined up.

And finally, I learned that the mace requires a lot of upper back mobility since the Mace Breathing Squats and 360 had you bringing the mace behind your head. You had no choice but to open up the chest and keep from hunching over or else the mace would smash into something. Not enough to hurt but enough to incentivize you to not do it again!

Another great thing about the mace is how versatile it is. You can change your grip to make exercises harder or easier, allowing you to get a lot of use out of a single piece of equipment. There are also a lot of other exercises you can do with the mace than just the 4 that I mentioned here. Add in some bodyweight exercises or a single kettlebell and you start to open up a whole world of workout possibilities without needing to invest in much equipment at all.

If I’ve piqued your interest and you’d like to learn more about mace training then here are a couple of resources for you. The first is the ONNIT website where you can buy a mace and/ or learn some more exercises and routines using it.

You can also check out this guy’s website where he goes over the 360, which is the hardest exercise to learn but one of the most beneficial for you to do. He also shows you how to make a mace out of a clay pot and bamboo stick in case you prefer to build your own.

You can also check out this infographic, which outlines some of the other basic mace training exercises. 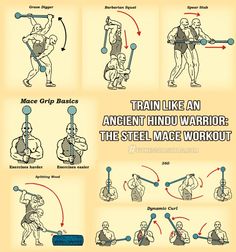 And just in case buying a mace or building one isn’t something you are willing to do then check to see if you have a 10 pound sledge hammer…or at least check one out next time you are at the store. Look for one with a round, straight handle but at the end of the day a sledge hammer is just a modern day mace made for pounding rocks instead of heads.

Training for a sport like mountain biking requires a dynamic blend of upper body strength and mobility and I haven’t found a tool that targets this better than the mace. After using it for a few months I can feel the difference in my posture and my neck hasn’t felt this good in a while. I’m feeling and performing better and I feel a lot of it is the result of adding in some mace training to my routine.

So I hope you’ll take me up on the challenge and get yourself mace and try these exercises out for yourself. While it may take a little practice and your neighbors may look at you like you’re nuts (mine are used to crazy stuff like this by now) I think that you’ll find the mace to be a valuable addition to your toolbox.