My challenge to you this week…do something that gets you out of your comfort zone!

Humans are funny creatures because of our ability to forget just exactly how bad something sucked in the heat of doing it. For example, if a woman really remembered what childbirth felt like they’d never do it more than once. Luckily that isn’t the case and the further away we get from something like that the less it seems to have sucked.

The ironic thing is that those types of events seem to be the best character builders as well. Like the old saying goes, whatever doesn’t kill you makes you stronger.

All of this leads me to my recap of my first Brazilian Jiu Jitsu tournament. As you can probably guess from the lead in, I had a few moments in the heat of battle where I was questioning my sanity for paying money to subject myself to it but I came out the other end better for it.

After waiting around until 3 pm to for my division to start – the old man white belts in case you’re wondering – I found myself standing by the mats waiting for my turn. I thought I was going to puke once or twice from the butterflies in my stomach and it took all my willpower to stay calm and focused.

As I was watching the regular white belt division finishing up before we got started I noticed something – there was a dude who I knew was competing in my division who was kicking all the 20 something’s asses. He ended up winning that division and I just happened to draw him as my first match.

He was a real nice guy who told me he had been doing BJJ for about 6 months but you could tell from his cauliflower ears and take down skills that he wasn’t a stranger to the mats. Turns out he had wrestled for a long time and recently picked up BJJ after a 16 year hiatus.

Well, he may not have been a wrestler for 16 years but he still had some moves. I won’t lie and say that first match was close. He ended up beating me on points 10 – 0 and I spent the whole match on my back getting crushed under him.

After I realized that I wasn’t going to win this match my goal was simply to put up a good fight and not get submitted. I spent the last minute staring up at the ceiling wondering why I would ever subject myself to this again.

After the match was over I wasn’t super stoked to say the least. I knew that the odds were against me winning but I was hoping for more than just getting smashed for a single 5 minute round to show for all my hard work in the gym, time I took to drive to Denver and money I spent on the trip.

Gathering up my stuff I got a tap on the shoulder. Turns out that since there were only 5 guys in my division I was going to get to fight in the Bronze medal match.

The next guy I went up against turned out to be a “real” white belt like me with no former grappling experience. I won’t go into a lot of details about the match since I have a video of it posted below but I will tell you this – I ended up winning by choking him out sitting on his chest in Mount and it was the most exhausting thing I have done in a looooong time.

It was much harder being the aggressor than just defending myself like I did in the first match. Add in the pressure of not giving up the win the closer we got to the end of the match and I felt like I had just run a marathon and hit a new PR on my deadlift when I was done – my lungs and muscles were toast.

Which leads me back to my original point. 5 minutes after that last match, despite being the winner, I wasn’t sure I’d ever do it again. However, the further away I get from it the more fun it seemed and now I’m really looking forward to the next one…weird but true.

This experience taught me a lot about myself and the power of pushing yourself out of your comfort zone. You can’t really grow when you are in your comfort zone but unfortunately most people spend their lives trying to stay there as much as possible.

For us as mountain bikers this doesn’t mean entering a race or event you feel you’ll do well in. Part of the discomfort should come from facing the unknown.

This can come in the form of entering a race if you’ve never done it, entering a different type of race if all you do is compete in one genre of riding or, better yet, doing something completely unrelated to the bike.

In fact, I really think that if all you do is ride bikes that you’ll get far more out of an experience that has nothing to do with bikes. I know it sounds like crazy talk but it is true.

The old samurai knew this well and would spend time studying art, poetry and other pursuits. These guys lived and died by the sword and even they recognized the need and value in expanding your horizons. Even my favorite old school samurai Miyamoto Musashi talked about the importance of studying other “ways” in order to better understand his own.

So there is my challenge to you…do something this week that scares you. It may only be signing up for something like a race, a cooking class or something else that you’ve wanted to do but have let the call of your comfort zone stop you from pursuing.

Just know that it will be uncomfortable and probably really suck in the heat of doing it, which is exactly what you want. You’ll come out the other end a better person, and a better rider, for it. 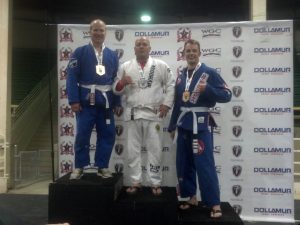