A few weeks ago I got the chance to go to Bend Oregon to present at the Venture Out Conference. Put on by the Bend Outdoor Worx business accelerator group, it is a contest where businesses in 3 different categories present on what they are doing to an audience of 400+ people.

I had applied a couple months prior and had been through a round of phone interviews but I didn’t think I’d be selected, so it was still a bit of a surprise to me to find myself on that stage talking about the Catalyst Pedals and why they are solving a huge issue in the cycling world.

But at the same time I was pretty calm. I knew that if I went up there and told the story behind the Catalyst Pedal and how it is already impacting lives around the world and got one person there to at least think about what I was saying I was already a winner.

So I went into my story about how I first found out that clipless pedals have less science behind their design than the Flat Earth Theory and how this knowledge plus my experience as a strength coach led to the inspiration for the world’s first mid-foot optimized pedal.

To be honest, I wasn’t exactly sure what I was going to say would be received. There were a lot of cyclists in the audience, most of whom rode clipless pedals, so it was kind of like marching into a Church of Cycling and telling them their clipless pedal god is dead…you never know how that’s going to go over.

Luckily no one jumped up and yelled “Heretic!” and I got through the presentation and following Q&A from the audience without any problems. When I was done I felt great…mostly because I didn’t lock up in front of all those people but also because I felt like I had done a good job telling people why the work we were doing was important.

Like I told them, the Catalyst Pedal is a manifestation of the truth about foot position and pedal stroke on the bike and my mission is to free people from the myths and half-truths of the past that are holding them back.

So as I sat there waiting for them to announce the winners I was fine with whatever the announcement was. I had done what I had come to do and anything else was just a bonus.

Well, as you can imagine I was pretty happy to get the bonus of winning my category! 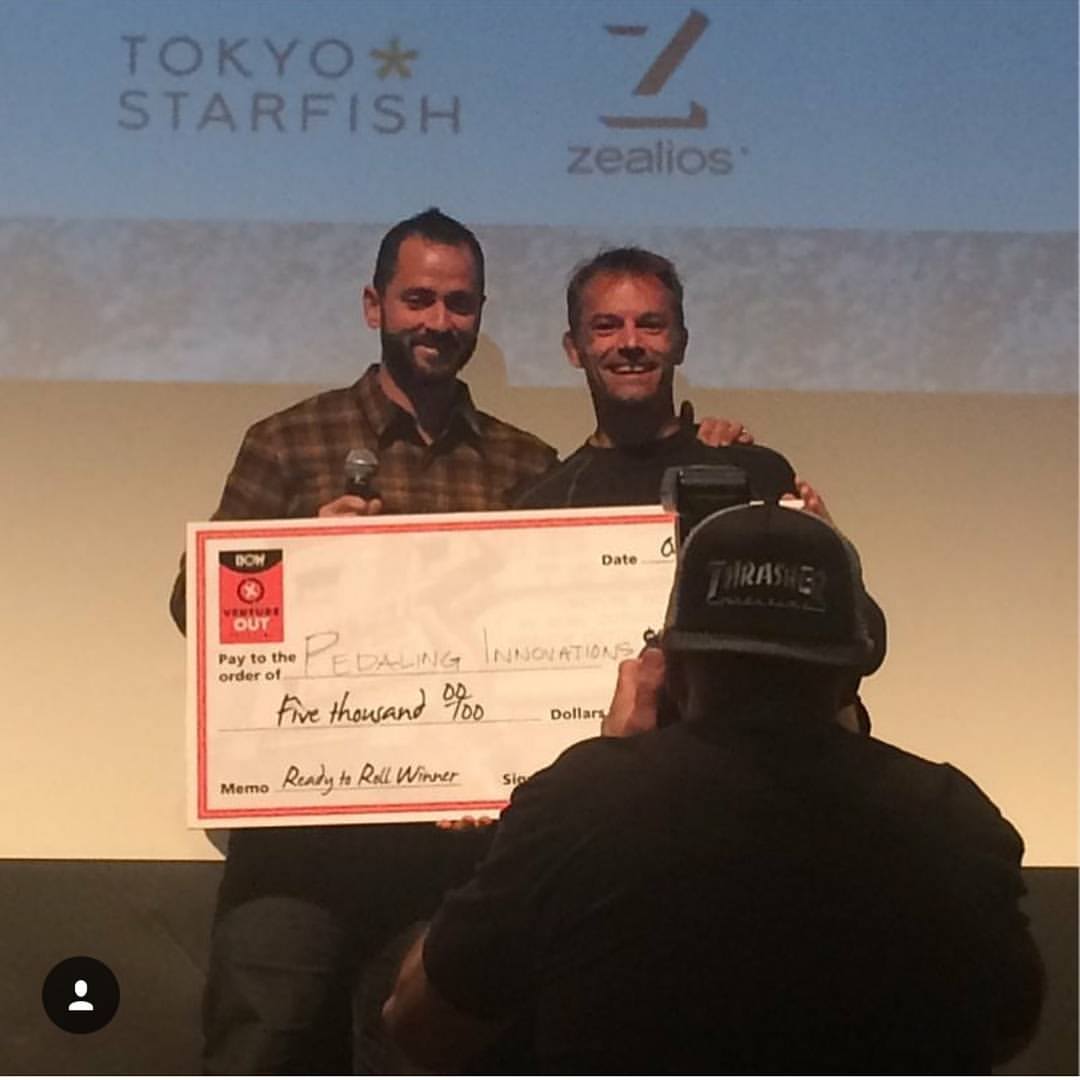 As one of the judges told me, they really liked what I was doing because it was disruptive, which is what they’re about. Most people are more worried about keeping everyone happy so it was really great to get the support of people who recognize that it takes someone making people uncomfortable with new ideas to bring about change.

As I was getting on the plane the next day to head home I was thinking about the journey that led me to the point of standing on a stage and telling people about how an idea I had 3 years ago was now a real product and that it was making an impact on people around the world. While it’s been a really long and tough process, I realized that it was the support of riders who believed in what I was doing that was really the secret ingredient to making the Catalyst Pedal a success.

Sometimes I forget that and focus too much on the negative comments and ridiculous remarks that get posted than the stories from riders who are using and loving the Catalyst Pedals. But thanks for being there for me and the cycling world, without your grassroots efforts this never would have been more than an idea.

So while you couldn’t be there, I want to say thanks for the role you’ve played in getting Pedaling Innovations to where it is today. We’ve come a long way but we’ve got even further to go but with your help I know we’ll achieve our mission of educating riders on the truth about foot position and pedal stroke.

Our Mission: To help riders move better, feel better and think better both on and off the trail.