Review of the book Cooked and how it might change your life for the better.

One of my favorite scenes in the movie Fight Club is where Tyler Durden and Ed Norton’s character are talking about what it’s like to have your entire life blown out of the window of a high-rise condo for widows and young professionals in L.A. As Ed Norton waxes on about how much it sucks to have lost all of his stuff – “you know, when I bought that couch I thought that whatever else happens, I have that couch problem solved” – Tyler Durden asks him a simple question.

Do you know what a duvet is?

When Ed Norton says he does, Tyler asks why does he know this. How does it help him in the hunter-gatherer sort of way?

Ed says it doesn’t. So if we’re not hunter-gatherers any more, Tyler follows up, then what are we?

Bingo. And this leads us to the book Cooked by Michael Pollan. 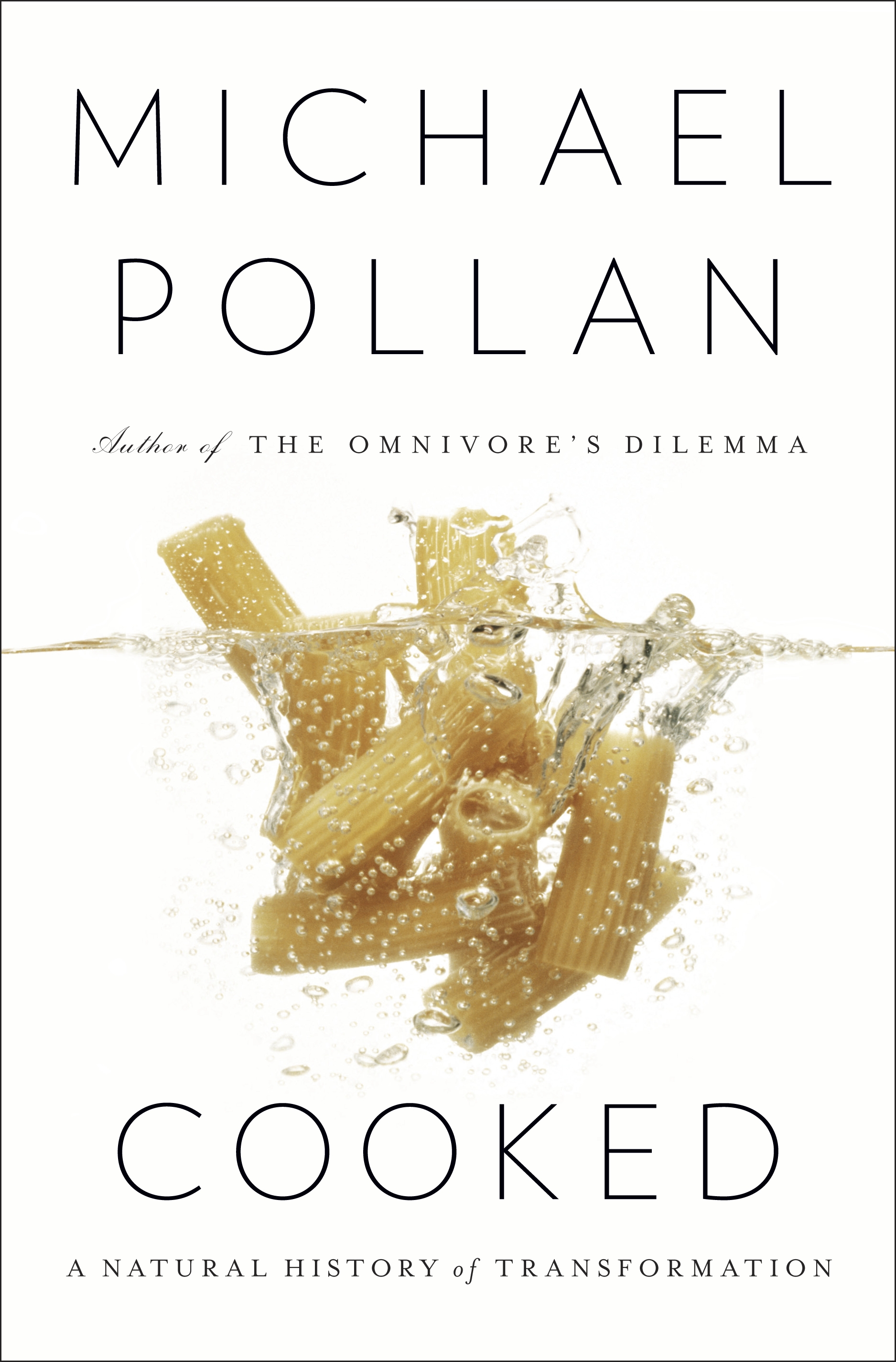 If you don’t know Michael is a champion of the natural food movement and wrote the bestselling Omnivores’ Dilemma (the book the movie Food, Inc. was loosely based on). In his newest book “Cooked: The Natural History of Transformation”, he looks at our most intimate relationship with food and how we transform it into something we eat.

Nowhere in our lives have we lost touch with the Hunter-Gatherer side of ourselves more than food. We have become proverbial and literal consumers, letting the food industry make our food as they tell us what is best for us, often to our detriment.

In Cooked, Michael looks at how man has harnessed the four basic elements – Fire, Water, Air and Earth – to transform foods into something that is more nutritious, keeps longer and neutralizes poisons and bacteria. Throughout the book he makes compelling evidence based arguments about the value of cooking in the evolution of man and something that that gave us a unique advantage over animals that can’t cook.

Among the benefits of cooking in general he noted that…

– When cooked, foods are rendered more nutritious and require less energy to digest, sort of like pre-digesting the food in some ways. In fact, humans couldn’t support the energy demands of our brains with the tiny guts that we have without cooking. Raw food advocates rely heavily on juicing or else they would spend all day chewing and eating much like chimps do in order to meet the energy demands that can be achieved by simply cooking foods.

– Cooking allows us to transform foods that other animals cannot access. The cooking process can neutralize poisons in plants that make them dangerous to consume uncooked. It also kills bad bacteria and in some cases encourages good bacteria, which also allows us to gain more from foods that otherwise wouldn’t be edible.

– It acts as a form of “food processing” that allows us to extend the life of some foods. Fermentation in particular is used to keep foods edible that would otherwise spoil quickly, allowing humans to access some foods like vegetables in the winter when they would otherwise not be available fresh.

– A lot of experts believe that cooking is what brought humans together into stable communities and eventually cities and towns. Some forms of cooking like baking bread and brewing beer require a large and steady stream of raw ingredients and by working together collectively humans can produce more than working alone. This common love of beer or bread was probably the first thing that inspired us to stop moving around as much and work together on something.

In a lot of ways, cooking is what made us who we are. One expert in the book called humans the Cooking Apes and when you look at our progression as a species it is hard to argue that cooking wasn’t the spark that started it all.

And this, argues Michael in the book, is why it is important that we embrace it just a little bit more. We’ve been conditioned to think of food preparation as something that we don’t have time for and isn’t really as important as the million other things we could be doing instead.

But that is exactly the problem because being involved with our food preparation and cooking forces us to be more mindful of what we eat and where it comes from. And this will help us make smarter overall decisions even when we aren’t the ones preparing it.

Like I mentioned, Michael looks at the history and execution of cooking through the four traditional elements of Fire, Air, Water and Earth. At the end of the book he even has some recipes for you to try so you can get started getting in touch with your cooking roots.

I really enjoyed Cooked and found it very inspiring. Much like in the movie Fight Club, sometimes we just need to do something that gets us back in touch with our more basic Hunter-Gatherer side and away from just being a consumer.

Since reading this book I’ve been grilling a lot more and found that even vegetables I usually don’t like taste pretty good. I just started lacto-fermentation pickling and plan on doing a lot more of it. I’ve been brewing beer for a while now and have long enjoyed the taste of fresh beer I made myself.

None of these things make sense from a time-and-money spent standpoint but that isn’t the point. Creating a sense of self-sufficiency and control over something as important as what I am putting into my body are the real reward and why I plan on preparing and cooking more of my own food from now on.

And, of course, since the healthier you eat the better you will feel from riding and training and the better you can perform it will help your mountain biking as well. Or in your local Fight Club, if you’re into that sort of thing.

In conclusion, I’ll paraphrase ol’ Tyler Durden – This is your life and it is ending one bite at a time.

Better make them count. Check out the book Cooked: A Natural History of Transformation, it just might change your life in some very important ways.