The other night I was flipping through my DVR and I came across the Starz! series Spartacus. I’d read a book on the history of Spartacus and was curious to see how they portrayed it. If you aren’t familiar with him, Spartacus was a gladiator who escaped and led the largest slave revolt in history. 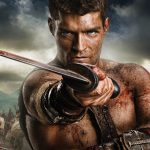 His army ravaged Italy from top to bottom and defeated the Romans multiple times in combat. When he was finally cornered and force into a fight he knew he couldn’t win his strategy was to personally fight into the heart of the enemy army and cut down their leader in hopes it would demoralize the Romans enough to get them to break ranks. He didn’t make it and got cut down on the way but he went down swinging.

In other words, he was a real bad ass who honed his physical skills in the gladiatorial training grounds. In the second episode Spartacus was training hard using a huge log and I suddenly realized that he was doing a Turkish Get Up and various loaded caries. While I’m not hard core enough to use a log (yet), I realized that I could do the same thing with a heavy sandbag and got inspired to put together a simple workout inspired by the gladiators workout.

In this video I show you how to do a sandbag TGU and various caries and how to create a simple but challenging workout combining the two elements. Check it out and let me know what you think…