The 10X Rule Applied to Riding, Life and Moving…

Grossly miscalculating how hard things are really going to be is part of human nature. In fact, that was the subject of a book I read last year called the 10X Rule by Grant Cardone. While the book was a great read, the big take away from it for me was that we should just assume that something will take ten times as much time, energy and effort than we assume that it will.

I suspect that high percentage of riders who read this blog fall into the category of people who don’t mind hard work and effort in the pursuit of their goals.

In the book Grant talked about how the 10X Rule applied to a lot of things in his life but for me it really drove home two things that I have known for a long time about training and riding.

First, most people suffer from a state of Uninformed Optimism. This is the point where you want to do something – like becoming a better rider – and you jump into it not knowing exactly how to accomplish it. Since you aren’t exactly sure how to go about it you can’t really be sure how much time and effort it will take.

At some point, though, Uninformed Optimism gives way to the realization that, like Grant points out in his book, that it will actually take a lot more time and effort to accomplish than you realized. In the case of becoming a better mountain biker you have mobility, skills, strength, power, cardio and mindset to deal with, which is usually much more than most riders realize going into it.

This leads me to the second thing I’ve known for a while – the sad fact is that most people simply don’t have what it takes to keep pushing when they realize this. Well, I guess I shouldn’t say “don’t have” since I think that everyone has what it takes inside them to accomplish something great but not everyone has it developed to the point that they will.

When they realize that accomplishing their goal will take more time and effort than they realized they slip back into their old rut, which, as the saying goes, is simply a grave without the ends kicked in yet. Not to get to far off subject here but this is the reason that so many people are stuck in lives they hate – they won’t take the actions necessary to change their health, careers and relationships because they keep running up against the 10X Rule and quitting.

Thankfully, this isn’t the case the everyone. Some people will either go into things knowing that they will take more time and effort than they think or are too bullheaded to quit when obstacles are thrown in their way. I suspect that high percentage of riders who read this blog fall into the category of people who don’t mind hard work and effort in the pursuit of their goals.

I say this because the emails and feedback I get from riders who have found ways to stay dedicated to their training program and accomplish some amazing results tells me that a lot of you don’t shy away from a struggle so that they can enjoy the results that can will come from it.

So, why do I bring this up? Well, I made the mistake of not observing the 10X Rule when planning the move into my new house this last weekend and ended up paying for it. I figured that since I was just moving 20 minutes away that it would be a bit faster and easier than moving to a new city but, like I found out, it wasn’t.

So, instead of getting all moved in and my basement gym set up like I had planned I just managed to get my stuff out of the old house and piled into the garage of the new house and got this far on my new home gym… 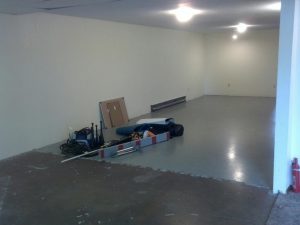 Luckily I had a guy working on demoing some stuff in the basement and getting the old carpet pulled up so I can just move my stuff downstairs over the next few days as I get moved in. I’ll be sure to get some more pics up when I get it done but in the meantime remember the 10X Rule and don’t get discouraged when you run up against it – it may not happen like you had planned but if you stick with it your efforts will pay off.

BTW, even though I was pinned to 11 all weekend with the move I did manage to get the new Phase 3 Workouts for the Time Crunched Trail Rider Solution finished and ready to go. If you haven’t signed up for the Time Crunched Trail Rider Solution yet but want to take advantage this 90 day program that uses 20 minute follow-along workouts you can do at home then click on the link below to learn more.

How It Can Help You Ride Faster, Longer and With More Confidence on the Trail. 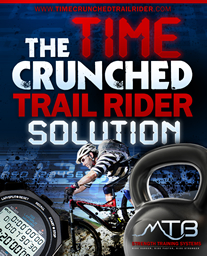