What the Thundercats can teach us about mountain biking.

One of the best parts of having a little boy is getting to find and watch all of the old cartoons I used to love. We’ve been through He-Man, Transformers and Teenage Mutant Ninja Turtles (although the new Nickelodeon Ninja Turtle cartoon is pretty legit).

The other day we came across one of my all-time favorites – The Thundercats.

I mean, what little boy wouldn’t love that one?

It was like they said “let’s take everything that is cool right now and put it in a cartoon”. Put it to a rocking ‘80’s soundtrack and some cool Anime style and you have a winner.

If you don’t know, here is a quick recap of the story…

The Thundrcats are made up of 6, well, Thundercats from the planet Thundera. They have been stranded on 3rd Earth and have to do battle with mutants and the evil Mum-Ra. Along the way also run into other bad guys and some good guys that they have to help as well, my favorites being Berbils (robot teddy bears from the planet Ro-Bear).

Each of the Thudercats has a cool power as well. Cheetara has super speed, Panthro has super strength, Tygra can turn invisible and the Twins – Wily Kat and Wily Kit – have super agility.

And their leader Liono has a super-sized ego that keeps getting him in trouble.

You see, Liono has a problem. In episode 1 he ends up in suspended animation to help slow the aging process for the long journey to 3rd Earth.

But when he got to earth he had aged some. While he was just 10 years old when he started the journey, he came out a full grown man.

And so he has a lot going for him – he’s big and strong, has a super sword (The Sword of Omens) and he’s also Lord of the Thundercats…as he reminds everyone several times and episode whenever they question his decision to march off alone yet again.

But he still has the mind of a 10-year-old and thinks that he knows everything and can do it all by himself. This means that he gets himself into trouble for no reason other than being stubborn and prideful. 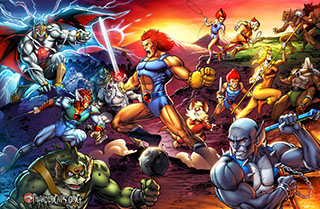 You’d think that Liono would eventually learn his lesson but then there wouldn’t be as many reason to yell “Thunder – Thunder – Thundercats HO!”, start the rockin’ theme music and kick ass – which wouldn’t make for a very exciting show.

And while we can enjoy a great cartoon based on the problems Liono causes himself by not letting others help him until he is already in trouble, the truth is that this is the same thing that a lot of us do every day.

A lot of us still have that 10-year kid in us telling us that we don’t need anyone’s help and that we can do it on our own. Perhaps we think that asking for help makes us look weak or we feel it is an indictment on our abilities.

Whatever the reason, most us tend to wait until something is already wrong before we start to look for some help.

But, like Liono, we end up causing ourselves more problems than we solve with this approach. Which is fine if you are a cartoon super-cat but not so good if you are a regular person trying to make the most out of your training and riding time.

I know that I’ve made a lot of mistakes being prideful and refusing to look for help when I knew I needed it. I also know that some of the best accomplishments in my life have been when I finally swallowed my pride and invested in some help.

While some people can do it all on their own, the truth is that most of us need some help and guidance. Using a program like The Ultimate MTB Workout Program or the 90 Day MTB Skills & Fitness Program is like making use of your own team of Thundercats to help you out.

So don’t make the same mistakes that poor Liono does in every episode of the Thundercats. Looking for help before something is already wrong can save yourself a lot of time and frustration.