What the Underpants Gnomes can tell you about endurance training.

I recently posted a video on Facebook from Pavel Tsatsouline (the guy who re-introduced kettlebells to the fitness world in the late ‘90’s) and in it he talked about the role of strength for endurance athletes. In it he talked about two studies from Norway where some endurance athletes (elite cyclists and marathon runners) saw an improvement in their race times after using a strength training program that had them do 4 sets of 4 reps on the squat.

In theory, theory is just like reality but in reality it isn’t.

The point he was making was that getting stronger can improve your performance in an endurance sport and not just the light weight/ high rep nonsense usually prescribed to endurance athletes to target their “slow twitch muscle fibers”.

After a few exchanges between me and few other rider who had experienced the power of getting stronger themselves I realized the mistake that this rider making in his logic.

He was talking about laboratory measures of improvement, not improvement of performance in an actual sport.

This is a classic mistake made by the “science guys” – the lab is not where things actually count.

In the book The Sports Gene David Epstein points out that laboratory markers of fitness like VO2Max and  Lactate Threshold do not automatically equate to sports performance. The sports world is full of overachieving athletes who succeed despite being “genetically inferior” (at least as far as we can measure in a lab right now) and genetically gifted athletes who squander it all away.

So when Pavel or I say that strength training will improve your performance in an endurance sport like mountain biking we aren’t saying that strength  training will lead to a measurable improvement in lab markers like VO2Max or mitochondrial density. That is the direct cause and effect trap that can severely limit your perspective on the human body.

We’re simply saying that if you get stronger you will see an improvement in your ability to ride faster and/ or longer. Your actual performance where it really counts will improve even if you can’t point to a direct cause-and-effect relationship to something you can measure in a lab.

The clock doesn’t lie but lab numbers can.

The real truth is that no one really knows exactly how things cause improvements in performance. Our understanding of the human body is constantly changing the narrative we tell people about how things work.

The best example of this is Lactic Acid. Not to long ago it was the metabolic boogeyman that we need to control and banish. Entire training programs and supplements were created under the premise that lactic acid caused muscle fatigue, muscle failure and too some extent muscle soreness.

Now we understand that none of this is true. Lactic Acid is actually good and something that your body needs and uses for high intensity work.

My point is that you have to be able to separate science from real life. While science can give us some insights into the real world of performance training, it isn’t the same thing.

In theory, theory is just like reality but in reality it isn’t.

It reminds me of the South Park where the Underpants Gnomes were stealing poor Tweak’s underpants. When asked why they were doing it they said that they needed them as part of their plan. 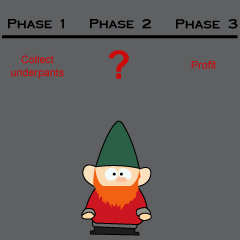 If you don’t know, the plan turned out to be…

No one knew what Step 2 was but they knew that if they did Step 1 they would somehow get to Step 3. The exact mechanism isn’t important and absence of evidence for why the whole thing works that way isn’t evidence of absence.

The human body is a complex organism that can’t be broken down into neat little boxes like “strength” and “endurance”. One effects the other even if we don’t really know what Step 2 is.

The take home point is that for the vast majority of riders out there the fastest way to see an improvement in your actual on trail performance is to get stronger. You still need to ride but until you can do some basic things like a 1.5 X Bodyweight Deadlift and a 24 kg Turkish Get Up on both sides (with relative ease) then that is your weak link, not some metabolic lab markers of cardio fitness.

Honestly, when you understand that those metabolic markers stop improving in elite endurance athletes (no one’s VO2Max improves indefinitely) and yet their performance continues to improve you realize that there is something else that really drives endurance performance. That something else is movement efficiency.

And a good mobility and strength training program like the Ultimate MTB Workout Program v5 can improve movement efficiency faster than anything else.

Anyways, that’s starting to get off into another subject that I’ll save for another post. In the meantime just be like the Underpants Gnomes and do Step 1 (get stronger) knowing that it will lead to Step 3 (riding faster and longer) even if you can’t explain exactly what Step 2 is.

Or you can just steal some underpants and see if it leads to profit…if it does let me know.

That’s it for now, if you have any questions or comments about this subject or how underpants have anything to do with this please leave a comment below, I’d love to hear your thoughts.

And if you liked this article please click one of the social media buttons below to help spread the word.