Which Muscles are Really Used During the Pedal Stroke?

One of the most persistent myths in the mountain biking world surrounds the pedal stroke and goes something like this – without being attached to the pedals you can not use your hamstrings properly which forces you to rely too much on the quads the power the pedal stroke. By not being able to curl the knee joint during the upstroke of the pedal stroke you create muscular imbalances and tire out the quads faster, or at least that is what most of us have been told. However, this understanding of which muscles are used and how they are used during a pedal stroke is completely wrong and potentially dangerous over the long run. 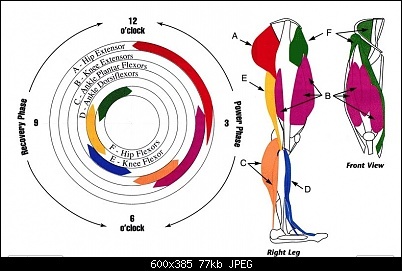 According to this theoretical model of muscles used during the pedal stroke the hamstrings are used maximally from 8 o’clock to 10 o’clock position while the glutes and quads are responsible for the downstroke part of the pedal stroke. This paints a completely false picture of the situation and leads a lot riders to assume that the hamstrings are only there to flex the knee joint on the upstroke, which would be impossible to do if you weren’t attached to the pedals. This, of course, would mean that it would be impossible to optimally pedal without clipless pedals, which is where the faulty logic that tells rides that it is impossible to pedal optimally without them stems from.

In fact, trying to have a rider curl their hamstring to produce force on the upstroke is unnatural and asks the knee to produce force in an unstable position. Your hamstrings are not made to produce power by curling at the knee and instead are made to produce power at the hips while helping to stabilize the knee joint. The idea that you need to curl your leg through the bottom and upstroke portion of a pedal stroke is simply wrong and based on old and faulty logic – you want to flex the hip to push the leg through the bottom of the pedal stroke, not flex the knee.

You want to produce your power at the hips, not the knee joint. The reason that a lot of riders have the knee issues is because the knee joint lacks stability, not strength. On a side note this is why I am an advocate for standing up more to pedal because it forces the knee and hips joints to act and stabilize more naturally than seated pedaling does. 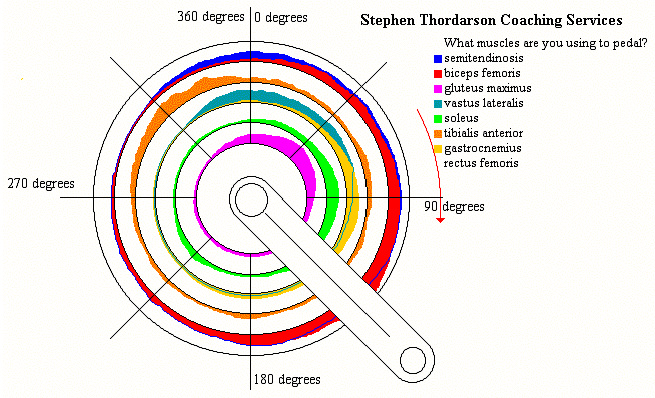 Take another look at the second picture and you’ll see how the downstroke finds all of the muscle groups lighting up and the upstroke sees very little activity by comparison. This also underscores the findings in the Mornieux (et al. Int J Sports Med 2008; 29:817-822) and Korf (et al. Med Sci Sports Exerc 2007; 39:991-995) Cycling Efficiency Studies I have referenced in the Flat Pedal Revolution Manifesto.

So what does this mean for you?

1 – You can (and should) be able to pedal your bike very effectively with flat pedals. This myth is one of the most common ones I hear from riders as to why they don’t want to try flat pedals when in fact flat pedals will actually clean up and improve your pedal stroke. I have written extensively about this on my site and before you assume that I hate clipless pedals I suggest you read the article Just Because I am Pro-Flats Doesn’t Mean I am Anti-Clipless.

2 – You should train your legs to produce a powerful downstroke using the hips as the primary power source, not the knee joint. This means that leg curls and leg extensions are bad exercise choices since they reinforce this “knee powered” pedal stroke. Exercises like single leg deadlifts and single leg squats are much more effective since they train the legs to drive from the hips, not the knees.

3 – When riding don’t worry about “spinning circles” or “keeping equal pressure on the pedals”. Do not try to curl the hamstring through the return portion of the pedal stroke. While a good, efficient pedal stroke may feel like you are spinning circles the reality of what your muscles are doing to produce that feeling are much different. Your body has one way to optimally produce lower body locomotion and you simply want to apply it to the pedal stroke.

18 thoughts on “Which Muscles are Really Used During the Pedal Stroke?”