Which muscles are really used during the pedal stroke?

One of the most persistent objections I hear from riders who have never tried flats is that without being attached to the pedals you can not use your hamstrings properly which forces you to rely too much on the quads the power the pedal stroke. By not being able to curl the knee joint during the upstroke of the pedal stroke you create muscular imbalances and tire out the quads faster, or at least that is what these riders say. However, this understanding of which muscles are used and how they are used during a pedal stroke is completely wrong and potentially dangerous over the long run. 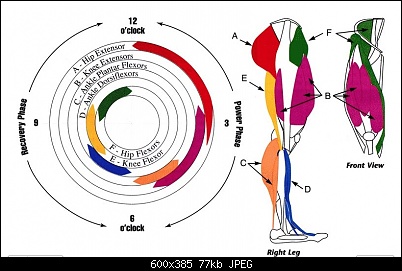 According to this theoretical model of muscles used during the pedal stroke the hamstrings are used maximally from 8 o’clock to 10 o’clock position while the glutes and quads are responsible for the downstroke part of the pedal stroke. This paints a completely false picture of the situation and leads a lot riders to assume that the hamstrings are only there to flex the knee joint on the upstroke, which would be impossible to do if you weren’t attached to the pedals. This, of course, would mean that it would be impossible to optimally pedal without clipless pedals, which is where the faulty logic stems from.

In fact, trying to have a rider curl their hamstring to produce force on the upstroke is unnatural and asks the knee to produce force in an unstable position. Your hamstrings are not made to produce power by curling at the knee and instead are made to produce power at the hips while helping to stabilize the knee joint. The idea that you need to curl your leg through the bottom of a pedal stroke is simply wrong and based on old and faulty logic – you want to flex the hip to push the leg through the bottom of the pedal stroke, not flex the knee.

You want to produce your power at the hips, not the knee joint. The reason that cyclists have the knee issues they do is because the knee joint lacks stability, not strength. This is why I am an advocate for standing up more to pedal because it forces the knee and hips joints to act and stabilize more naturally than seated pedaling does.

Take another look at the second picture and you’ll see how the downstroke finds all of the muscle groups lighting up and the upstroke sees very little activity by comparison. This also underscores the findings in the Mornieux and Korff studies, which was that a powerful downstroke with the lead leg and a more passive return of the trail leg was the most powerful and efficient way to pedal. You shouldn’t be worrying about trying to create power on the upstroke, which means that you can create the most powerful and efficient pedal stroke without being attached to your pedals.