Why I learned to throw knives.

Did you know that humans are the only creature on the planet that can throw with power and accuracy?

Oh sure, the monkeys at the zoo can throw poop at you. But flingin’ poo and throwing a rock hard enough to knock something out or kill it is are not one and the same.

It seems that, among other things, humans have some innate natural movement gifts that weren’t given to any other creature on earth. We are born with them and they are our birth right.

But we let them degrade because of two things.

The first one if pretty obvious – our modern lifestyle. While I won’t go into how a lot of it is driven by people working jobs they hate for crap they don’t need, there are some real drawbacks to how much we sit and do nothing physical all day.

However, there is a second culprit that robs us of these gifts, which is how much we specialize with our “play time”.

From a pretty early age we were encouraged to pick 1 or maybe 2 sports and stick with them. We take this attitude into adulthood and do the same thing, usually picking 1 or 2 activities that we spend most of our free time doing.

This lack of movement on a daily basis coupled with our insistence on spending as much of our free time doing the same thing leads to a lot of pain and performance issues.

What this means for you is that you need to take a step away from your special sport and do something different. And no, I’m not talking about doing something that is kind of like what you already do like road/cross cycling or running.

You need to do something that really challenges you in ways that riding and the gym typically don’t. And it doesn’t always have to be for “fitness”, it can just be something fun to work on one of your innate human gifts that you have been neglecting.

Which is what brings us to throwing knives.

When I read that humans should be able to throw with some power and accuracy with both arms I took that as a challenge. I started throwing tennis balls against the wall both right and left handed and throwing the football with my little girl left handed as well.

As I got better I remembered something I had read about my favorite samurai Musashi and his students. Along with being expert swordsmen they were known for their deadly accuracy when throwing knives and darts as well.

Story has it that they could throw a peach into the river and then stick it with a knife or dart. In fact, Musashi won a fight when he lost his large sword and threw his short sword to kill the other guy as he charged in.

So I got inspired to get some throwing knives and learn how to use them. I went to Cabellas and found a set of 6 knives for $30, bought them and took them home to try out.

As luck would have it I stuck my first throw. Which was good because I proceeded to miss my next 20+ throws.

Like most things, it took a lot of bad throws to figure things out. But I stuck with it and started to get more consistent. My daughter also got in on the action and is getting pretty good as well. 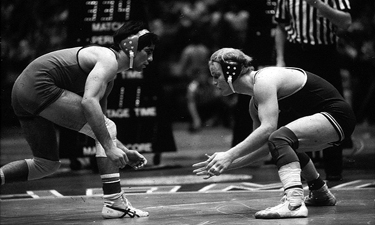 Now I have a stump set up in the backyard and, while I still miss some throws, I’ve also gotten to where I can sink 4+ knives on a consistent basis. I know you have to take my word for it but here’s a picture of when I got 6 in a row.

So, by now you are hopefully inspired to freak your neighbors out and get some throwing knives. It is surprisingly addicting and fun, plus it gives you something interesting to bring up in conversation.

But you may also be wondering how do throwing knives help you become a better mountain biker?

Well, the truth is I’m not sure that they do in any direct way.

But learning to throw with power and accuracy is something that you should be able to do as a human and when you lose that ability it can come back to haunt you. I’d be willing to bet that those of you who have some upper back and neck issues also have trouble throwing and I don’t think those two things are unrelated.

So, by becoming a more well rounded human being you increase the potential of the mountain biker. The upper back mobility and stability that is required to throw well also help you maintain efficient posture as you drop down into the Attack Position on your bike.

This is why having time when you get away from the bike for a bit and add in some crosstraining is really important. One of the biggest mistakes I see riders make with their programs is that they focus 100% of their time and energy on “mountain bike specific” stuff and never have an element of randomness and fun.

By adding in random stuff like knife throwing and having times of the year when you focus more on things that challenge you in different ways you avoid the pitfalls that come with losing your innate movement gifts.

Click here to learn more about how to take the guesswork out of training this off season.

I’d also like to encourage you to start adding in some random elements into your program like throwing knives, hanging from tree branches or crawling around on the ground. We used to call it “playing” when we were kids and it is something we need to remember how to do as adults too.