Why I’ve switched to an oval chainring.

I’ll admit that I wanted to hate it. When the Absolute Black oval chainring actually showed up in the mail I knew I was going to have to try it out but I sure as hell didn’t expect to keep it on my bike. I mean, everyone knows that oval chainrings suck and that the industry already tried it with the infamous BioPace rings that Shimano tried to pass off on us.

Having ridden bikes for 15+ years and spending several of those in a bike shop as a mechanic, I’ll admit that I helped to spread that story. But who could blame me – several years back I had pedaled a few BioPace equipped bikes around the parking lot to check them after a tune up and they really did feel funny and not at all what I would want on the trail.

Now fast forward to a couple months ago when I got an email from someone telling me how much he loved his oval chainring. He said that you could get oval chainrings that were much different than what BioPace felt like and that they actually helped on the trail.

Of course, I’d heard this before but I never believed it. For the last few years I’d heard that there was a new generation of oval chainrings that were supposed to fix the problems that plagued BioPace. But I figured this was just another handful of magic beans and never paid it much thought.

However, there was something much different about this email. This guy liked his oval chainring so much that he wanted to send one to me as a thanks for all the help he had gotten from my blog over the years. I figured I couldn’t claim to be objective and not even try it so I agreed. I told him the size chainring I needed and promised to try it out when it showed up.

And, like I said, it did indeed show up. After letting it sit on my desk for a week I finally decided to take it into the shop to get it put on and endure the questioning looks and comments that I knew were sure to come. By this point I was actually pretty curious about what it would really feel like and so I was prepared to put up with a little good natured ribbing.

So I dropped it off and explained that I was trying it out to see how it felt on the trail but that they should hang onto my other chainring for me. I figured I’d get one or two rides in and be ready to switch back. I don’t like to feel like I’m being held back by my bike on the trail and I’ll only endure so much to “check something out” before I go back to what I know works.

After waiting a couple days I got the text that my bike was “ready to shreddy”. I went to pick it up and take it on its first ride, my curiosity piqued at this point. I was really looking forward to just getting into the parking lot for a few hard pedal strokes to see what I was going to be dealing with. 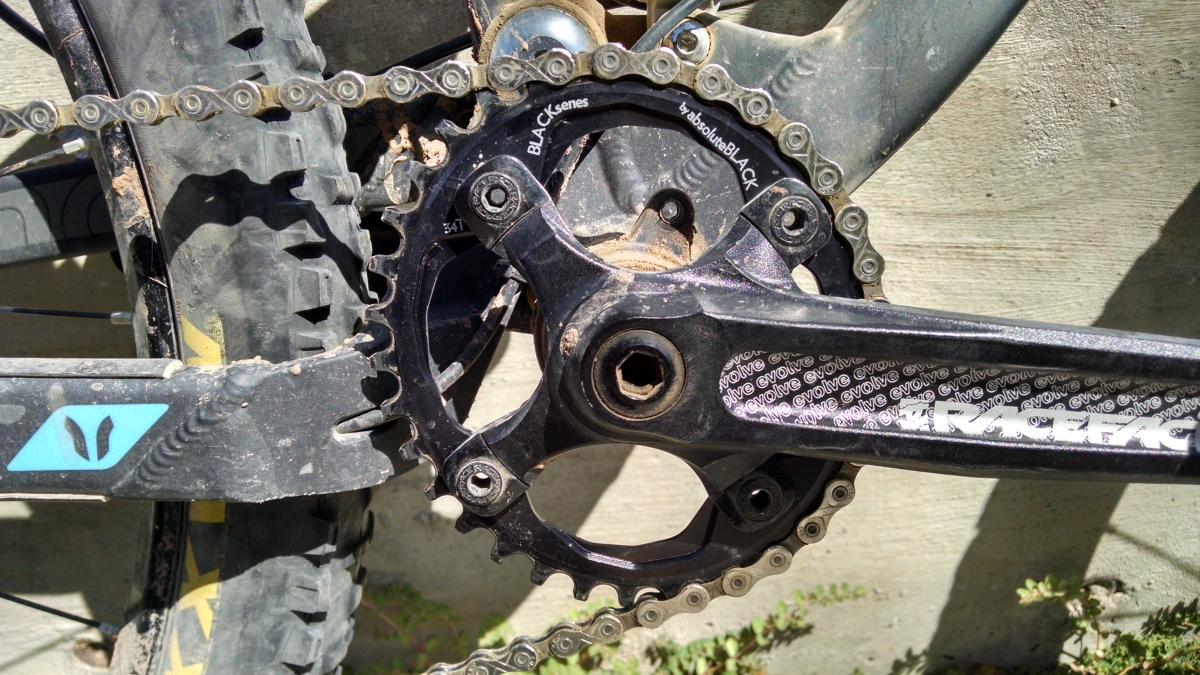 Fully prepared to turn around and give it back to the shop to have them take the oval chainring off, I went into the parking lot and laid down those first few pedal strokes. I was ready to feel some weird spot in the pedal stroke where the tension would feel funny for some reason. But it didn’t feel too bad. A little different but not bad.

So I decided to step it up a notch and take it out on the trail. Again, I couldn’t put my finger on it but it did feel slightly different…but not in a bad way. In fact, as much as I hated to admit it my pedal stroke did feel smoother.

Still not convinced I took the bike home and didn’t say much to anyone about it. I wanted to get a few more rides in and get back on a round chainring to see what difference I felt on it once I had some time on the oval chainring. I still figured I’d go back to the round chainring eventually but my first ride was intriguing enough to warrant some more “research”, a.k.a. trail rides.

That was a few weeks ago and I’ve still got the oval chainring on my bike. What’s more, I don’t plan on taking it off anytime soon. After getting used to it and trying out a round chainring I can really feel how it smooths out the power spike that you get from your pedal stroke. This power spike is one of the major factors you have to control on loose, technical climbs and so this means you don’t have to work as hard to maintain traction.

It also smooths out the pedal stroke in general and you can feel your legs working more efficiently. Since you are not having to push as hard at the top where you are weakest you don’t have to expend as much energy and it is easier to get momentum into the pedal stroke. But the chainring ramps up the tension as you get to the strongest parts of your pedal stroke, allowing you to take advantage of your legs natural strength curve.

If you think about it, it is trying to accomplish the same thing that some people claim is the reason they pull up on the backstroke – to maintain “even tension on the pedals”. By pulling up and pushing down at  the same time you lessen the power spike into the pedal, making it less likely you will spin out on a climb. However, as the studies I have referenced in the Flat Pedal Revolution Manifesto tell us, when you apply this technique you sacrifice power and efficiency.

The oval chainring looks to accomplish this same task but from a different angle. Instead of asking you to pedal in a sub-optimal fashion to compensate for the uneven power transfer, you change how that power is being transmitted into the drivetrain. You change the machine to accommodate how the human optimally moves, not the how the human moves to accommodate the machine. This allows you to continue to pedal in your strongest, most efficient manner possible while smoothing out how that pedal stroke is transmitted into the drive train.

This goes for both seated and standing pedaling – I was a little worried that it would mess with the “feel” of standing pedaling too much but it feels just fine. In fact, there has not been a single instance on the trail where I’ve missed my round chainring.

Now, with all of this said I need to reel it back in a little bit. I’m not saying that you “need” an oval chainring. Most of the time I can’t tell a difference between the round and oval chainring but there are a few spots where I can feel myself not having to lock down as hard on climbs to maintain traction or I have a little bit easier time pedaling out of a spot where I got stuck in a higher gear than I wanted.

So if you are in the market for a new chainring or are interested in gaining a legit efficiency advantage on the trail I’d recommend checking out the Absolute Black oval chainrings. There may be other good ones on the market but theirs is the only one I’ve tried and so it is the only one I can vouch for. Like me, you may just find you were handicapping yourself based on nothing but public opinion.