I would have to say that 90% of the MTB riders and racers that I have met would be defined as “over skilled”. It sounds absurd since most feel that some aspect of their riding needs work, be it skill related such as gate starts or fitness related such as better power endurance (I define MTB specific fitness as a “skill”). However, when you really understand how the human body functions and best adapts to MTB specific skills and fitness you will see what I mean. First, though, I need to explain the OPP.

The Optimum Performance Pyramid (OPP) was first introduced to me by Gray Cook, a highly influential figure in strength training circles. It is probably the best explanation that I have come across describing how performance training should be viewed. Gray uses the OPP to explain the 3 distinct levels of performance training, their prioritization and how to best integrate them.

The first, and broadest, level is Functional Movement. Contrary to the current fitness trends, this does not mean standing on a wobbly doo-hicky, looking like you are trying out for the circus. Functional Movement simply refers to developing adequate mobility, body control and movement awareness in order to safely handle higher level movements.

Examples of exercises in this level would include single leg box squats, pistol squats, Bulgarian split squats, single leg deadlift, push ups and their variations, inverted rows and alternating DB shoulder press. Bodyweight and unilateral exercises make up the bulk of this type of training. However, bodyweight exercises are extremely humbling when challenging variations are used. Do not underestimate the power of this type of training. 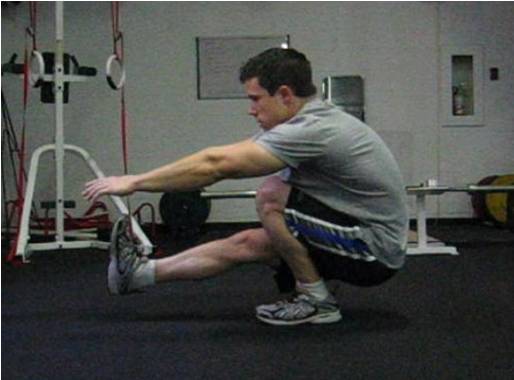 The Functional Movement level should also address any imbalances in the body, both mobility and strength wise, as they are a huge red flag for a potential injury. An athlete without a strong base built in this level of training will be far more prone to injuries, have a harder time mastering new skills and techniques and generally find that their training efforts yield few and inconsistent results.

The second level of the pyramid is Functional Strength. This level focuses on improving your raw strength and power. As I have touched on many times, increasing these areas will effectively add to your raw potential. Riders without adequate time spent on this level will also find that they have a harder time mastering new skills and will probably feel as if they have hit a plateau with their progression.

Examples of exercises in this level would include deadlift, front squat, bench press, military press, weighted pull ups/ chin ups, and DB rows. Compound, core exercises for the main movement patterns make up the bulk of this level.

The last, and smallest, level is Functional Skill. Unfortunately, this is where most training that MTB riders undertake would fall. This includes trail riding, DH runs, dirt jumping, 4X track time, gate starts, sprints, intervals and high level strength training methods such as plyometrics and Olympic Lifts. These methods will only yield the biggest “MTB specific” gains if they are used by someone who has spent time developing the base levels of the performance training pyramid. Believe it or not, over use of training methods in this level can actually slow down and stagnate skill development and fitness progression.

In fact, if you talked with any of the originators of a specialized training method I will guarantee you that they would tell you that they intended that method to be used by someone who had progressed into it. Every good strength coach understands the importance of laying a solid foundation and building on it in a progressive manner, but that approach is rarely reported on in the media or used by less skilled fitness professionals. What you find in the magazines and training boards is someone who reports on the specialized method independent of the progression intended to lead into it. Everyone wants to report on, learn and/ or use the “special” and “secret” training method of the champs, but failure to understand the progression into that method does a great disservice to the pioneers that gave us those methods.

Plyometrics have to be one of the best examples of this. Developed and refined by the old Soviet Union, plyometrics have developed an almost mystical status here in the United States. Almost every training conversation that I have with a rider eventually comes around to “what about plyometrics”, as if they hold the key to all riding goals. Riders who can barely pull off a bodyweight squat are jumping around cones and off of boxes in the quest for a MTB specific workout. However, the pioneers of the plyometric method would be greatly disturbed by this approach.

Some of the old Soviet training texts suggest that an athlete should have progressed (there’s that word again) to a double bodyweight squat before they were ready for depth jumps and other high level plyometrics. While I may not agree with that specific suggestion (more recent suggestions are around 1-1.5 times your bodyweight), it does underscore the fact that no one came into their training program and started off with plyometrics. In fact, it could be years before they would allow an athlete to use those higher level training methods if they felt adequate functional movement and strength had not been established. BTW, the Soviets kicked a lot off butt with this approach and this template has become the model for almost every high level strength and conditioning coach in the world.

So, as you can see from this point of view, most riders spend far too much time and focus on the Functional Skill level of the OPP. A lot of them may not have spent any time working on Functional Movement and/ or Functional Strength. This makes them over skilled, as their MTB specific skill and fitness progression is maxed out compared to the base that they have built. This means that a long term approach with an eye on safely progressing through the 3 levels of the OPP is needed for sustainable results. Without it, you are simply guessing at what will help you and hoping that it will. I don’t know about you, but that approach leaves too much to chance. If I’m going to invest time into training I want to be sure that it is going to pay off.

Note: do not confuse “over skilled” from a performance training point of view with having “adequate skill” from a pure performance point of view. Most of us will never be satisfied with our skill and fitness levels in every aspect of riding so we will always be looking to get a little better in some aspect on the bike. What I am saying is that at a certain point you must re-solidify the base of your OPP in order to continue to realize the gains offered by the higher level strategies.